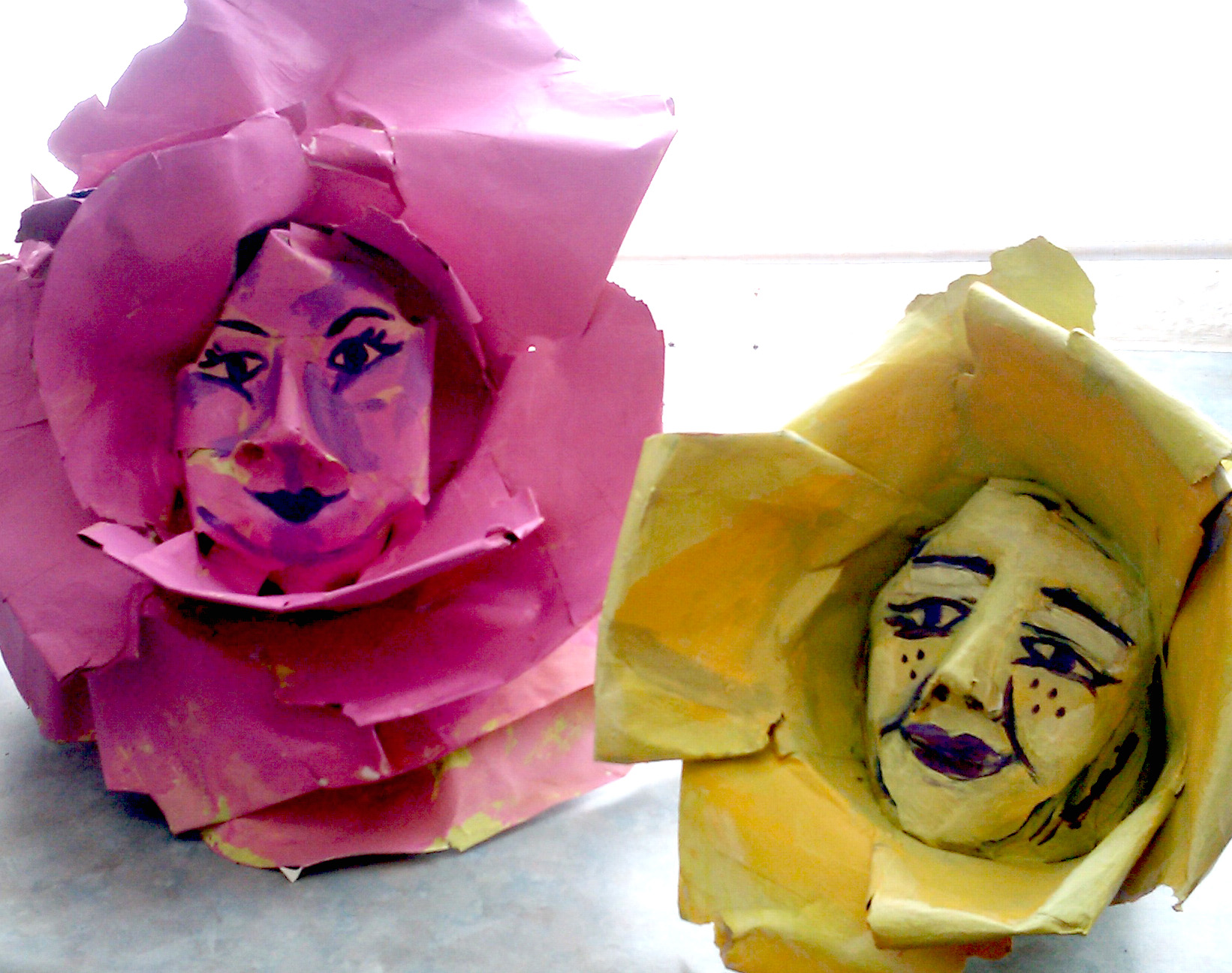 Here’s the first of the flower people = only hundreds more to do! 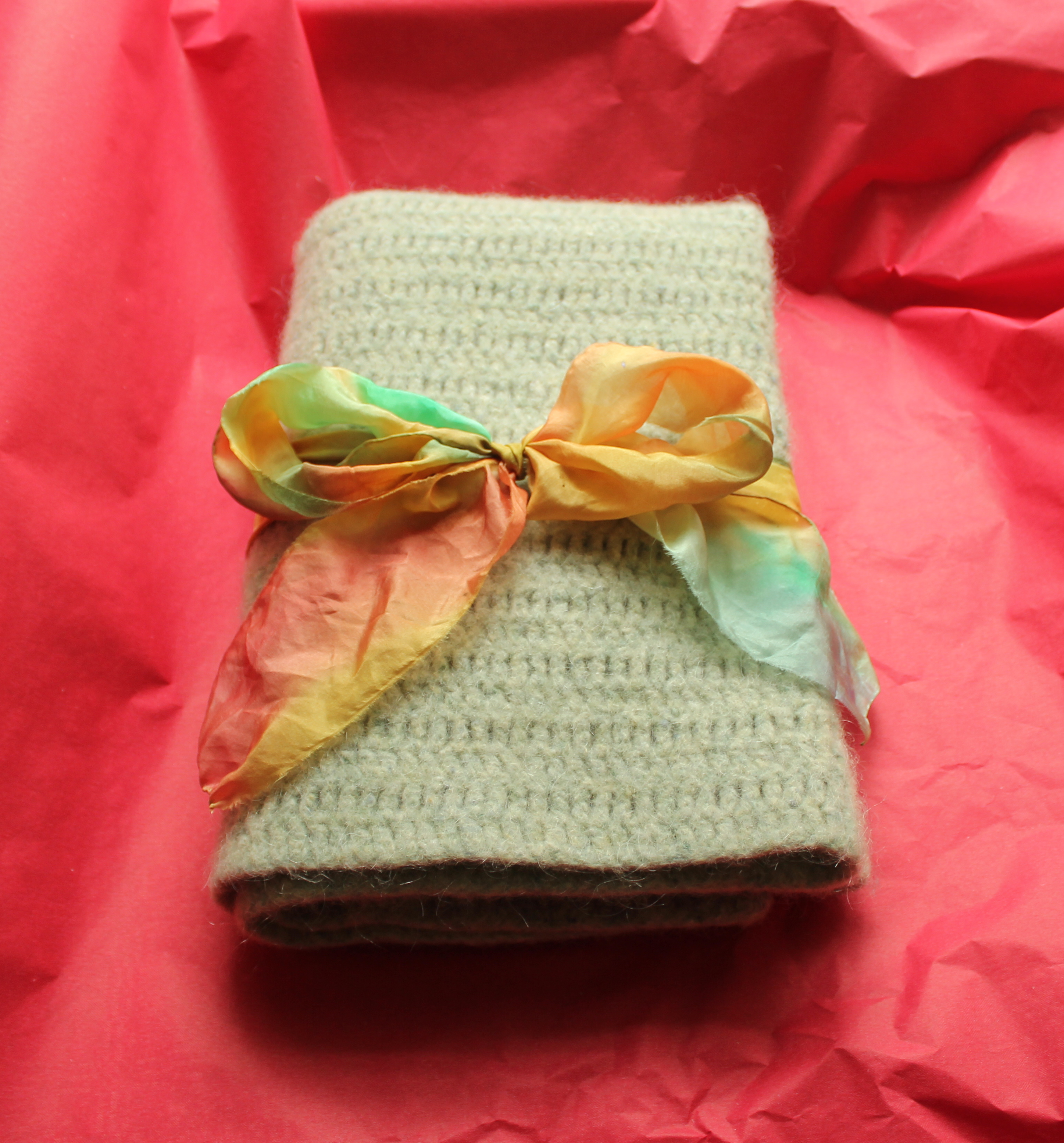 These are coming along S L O W L Y, what with my recent preoccupation with horse riding, and all things The School Creative Centre – especially Christmas Bizarre. I want to dress the corridors in an Alice in (wintery) Wonderland style, making large papier mache flowers and stuff… An exciting progression for my mache things, but am a bit panicky about getting it all done by December… Well, most importantly here’s a picture of a finished blanket! 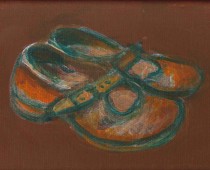 Oh yeah, I set up a Folksy account a while back, and I am starting to put on work that is for sale there. So far there hasn’t been much interest, but it’s still a useful exercise to document the work nicely, think of a name and a price etc…
Check it out here: http://www.folksy.com/shops/nikkitompsett 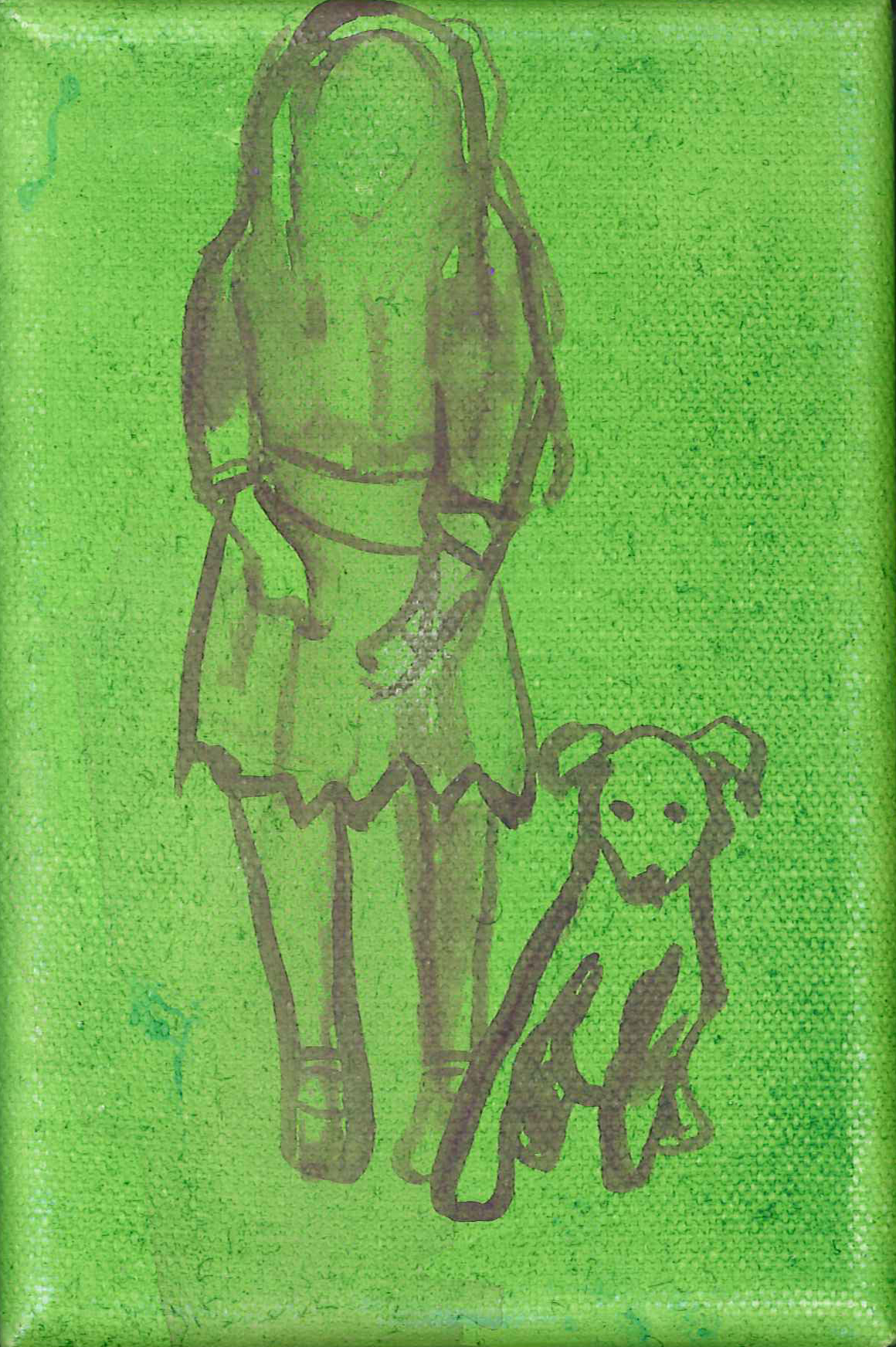 I have been enjoying showcasing my new work at Rye Art & Craft Fair, which is held monthly at Rye Community Centre.  I haven’t been contributing every month, but hope to be doing the August and September ones if things don’t get too hectic at work.  New paintings are focusing on human/animal relationships based on found photographs.  I haven’t stopped with the papier mache, and plan to do some more larger pieces that have the potential to be commercial too.  Large vessels and bowls are what I have in mind.  I am also having a go at some more figurative pieces that can be used to dress the foyer at The School.  It’ll be interesting to try and create something that is big and bold without looking too schoolish. Will be thinking Rachel Feinstein…

I also went a bit mad when visiting Uppingham Yarns, and have somehow committed myself to making a series of large rug/blankets for the winter months.  I have some gorgeous colours, and have already completed a small soft green blanket that has been felted after crocheting.  I can’t wait to get some feedback, and am hoping for some sales or commissions as I just love making them but can’t just keep making them for myself! 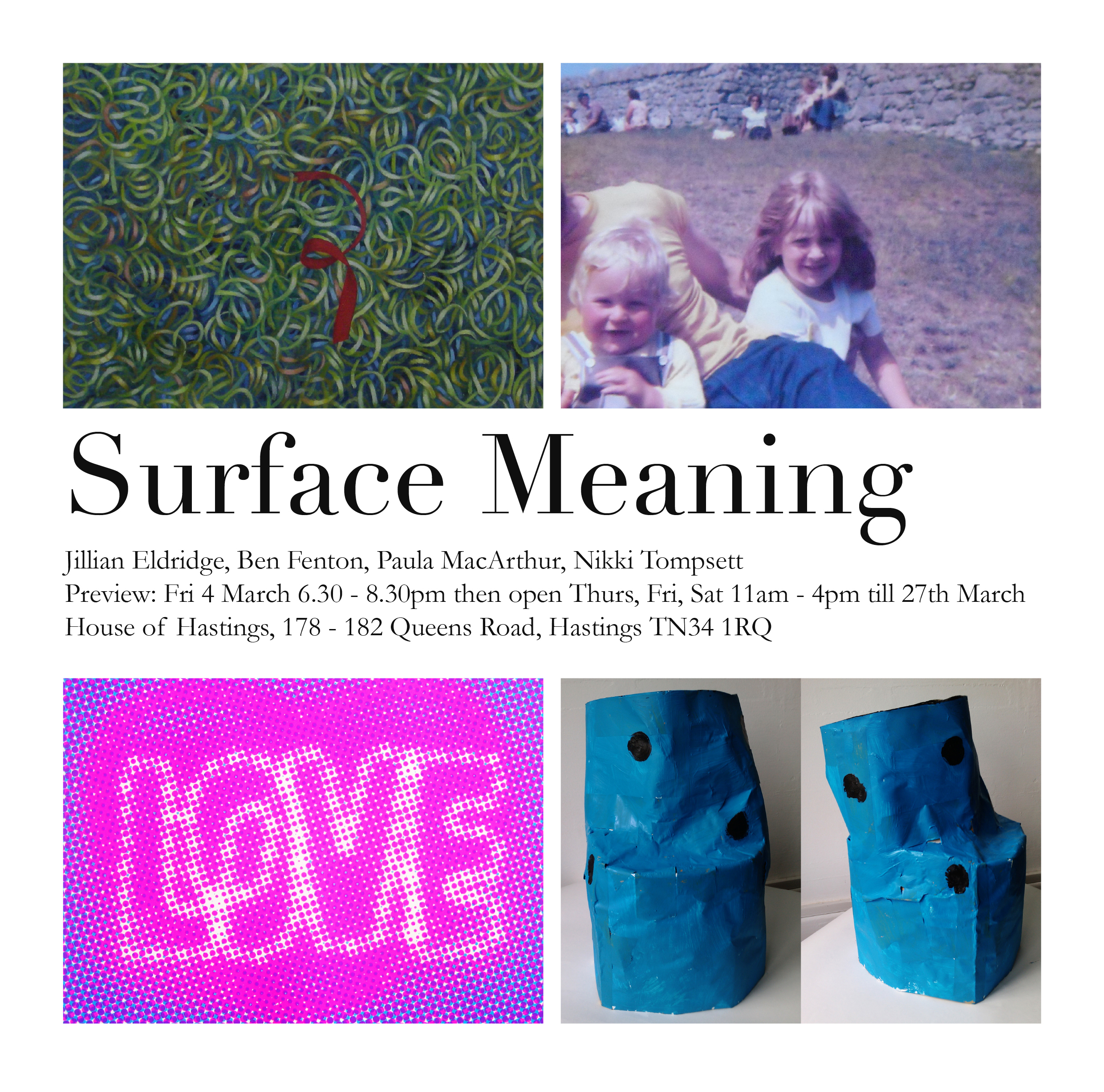 Surface Meaning was suggested by Paula MacArthur, when a slot became available for exhibiting at the House of Hastings in Queens Road.  There was a quick hands up to see who would be interested out of all the artists at The School Creative Centre.  Paula had to do a quick proposal, and we realised that all the work was either on paper or about paper! We gradually realised that it was going to be an interesting show.  Ben, who is usually a photographically precise painter decided to do a conceptual piece using found photographs.  Paula is also a painter but is showing her screen prints.  My papier mache painting/sculptures grew and grew, and strangely but beautifully relate to Jillian Eldridge‘s super quiet paintings of paper…

The show is on until 27th March and open Thurs – Sat 11 (ish probably nearer 12) till 4pm…  It’s extremely cold in the gallery and we’re all pretty much dreading our invigilation sessions.  Please come and distract us! 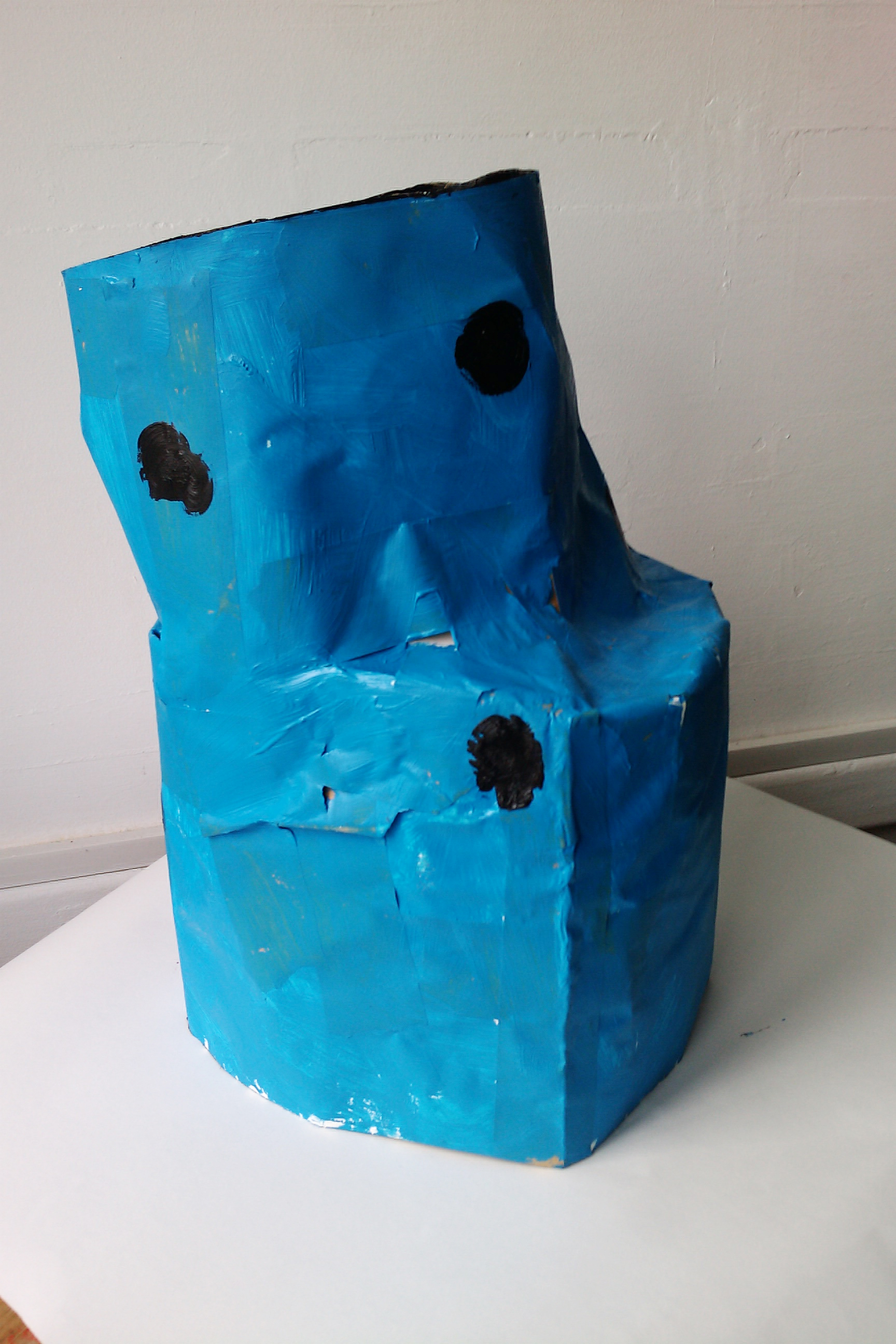 This is a photo of  a hastily finished ‘sketch’ of what i want to do for the show.  It came out of a conversation with Ashley Dixon about bigger = better, so I’m hoping to make some giant papier mache sculptures/vessels.  Am planning to make them from brown tape, cardboard and paint.  Fingers crossed that they’ll dry in time!

On Saturday the 12th February I participated in the first of Alice Mason’s Art and Craft Fairs at the Community Centre in Rye.  It went well with lots of people through the door, I even got to catch up with some old Todds Gallery clients.  I relished the chance to get feedback on my new work as well as selling three paintings!

It re-affirmed my feeling that I am still pretty much a painter’s painter, as all the work that sold was to fellow artists – not that I’m complaining, it’s a great complement!  All the pieces were also very much pocket sized and suitable for putting on a mantle piece or a wall… I had meant to get more ‘brick’ canvases from Atlantis, but instead I got some narrower ones, which I plan/hope to get done for the next fair on the 5th March.  Not long at all!

I have also put my name down for an exhibition at Hastings House, a disused shop along from Morrisons Supermarket in Hastings town centre.   This’ll be a dynamic show with Ben Fenton, Jillian Eldridge and Paula MacArthur (organiser).  I have been talking with Ashley Dixon about the idea of collaborating on some super-size papier mache vessels, and he seems quite keen, but we had better get a move on with only a couple of weeks to work on them!   I had planned on something a little simpler, but Ashley will push me to be more ambitious, which must be a good thing! I am making some smaller versions, so we’ll see how they go! 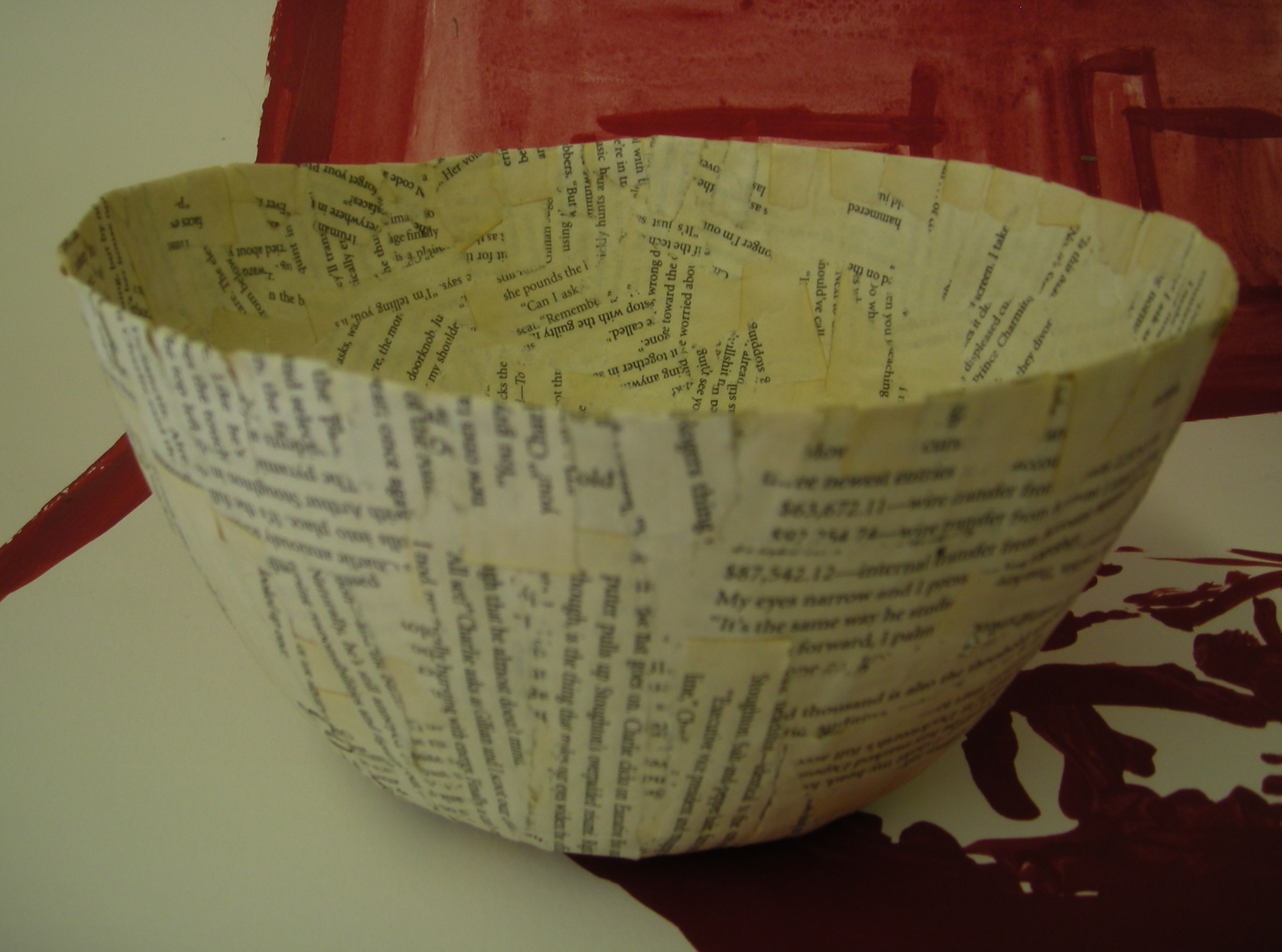 Wow! Time has flown by! I am working on The School’s annual Christmas Fair, doing the admin and design as well as attempting to make work for my own stand.  A couple of years ago I did a few papier mache bowls for todds gallery which sold well.  I made them out of trendy art and design magazines, and enjoyed  the process of using stuff lurking around my house as well as creating something that’s fun and pop arty and a little bit useful! 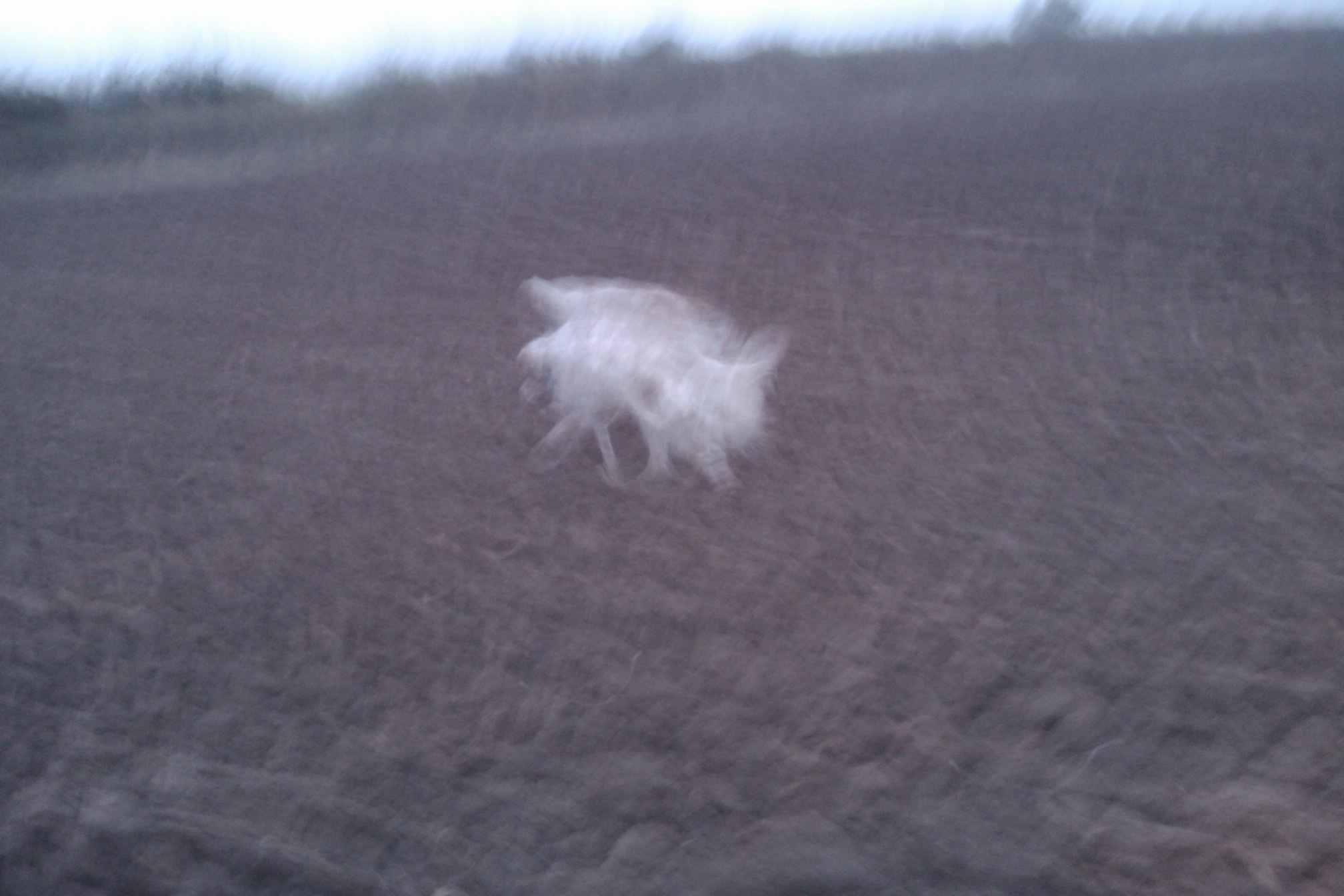 In Rutland at the moment.  The weather is consuming me, relentless drizzle, big grey sky, the colour of the ploughed fields.  The little birds taking flight from the hedge rows, one with a distinctive yellow head.  Like the idea of making a complete room full of dark earth colours, and trying to capture the clouds pressing down, yet subtly translucent, offering peace and even escape.  Thinking about Katharina Grosse’s environment’s.

Also liking the way the dogs are apparitions in the camera phone pictures. Maybe a series of paintings, or get some of the photo’s printed out. Objective 2: overview of 13 years of artistic endeavor…  It feels about time to collate all my old work and have a good old look at it.  Most of it will have to be on Flickr, please investigate!  Feedback appreciated!